Research led by research fellows Sho Torii and Yu Sato was recently published in the Journal of the American College of Cardiology on Eruptive Calcified Nodules as a Potential Mechanism of Acute Coronary Thrombosis and Sudden Death, a study that assesses calcified nodules as a cause of coronary thrombosis.

Additional details are shown below, or you can Click here for the full article.

Background: Calcified nodule (CN) has a unique plaque morphology, in which an area of nodular calcification causes disruption of the fibrous cap with overlying luminal thrombus. CN is reported to be the least frequent cause of acute coronary thrombosis, and the pathogenesis of CN has not been well studied.

Objectives: The purpose of this study is to provide a comprehensive morphologic assessment of the CN in addition to providing an evolutionary perspective as to how CN causes acute coronary thrombosis in patients with acute coronary syndromes.

Methods: A total of 26 consecutive CN lesions from 25 subjects from our autopsy registry were evaluated. Detailed morphometric analysis was performed to understand the plaque characteristics of CN and nodular calcification.

Results: The mean age was 70 years, with a high prevalence of diabetes and chronic kidney disease. CNs were equally distributed between men and women, with 61.5% of CNs found in the right coronary artery (n = 16), mainly within its mid-portion (56%). All CNs demonstrated surface nonocclusive luminal thrombus, consisting of multiple nodular fragments of calcification, protruding and disrupting the overlying fibrous cap, with evidence of endothelial cell loss. The degree of circumferential sheet calcification was significantly less in the culprit section (89° [interquartile range: 54° to 177°]) than in the adjacent proximal (206° [interquartile range: 157° to 269°], p = 0.0034) and distal (240° [interquartile range: 178° to 333°], p = 0.0004) sections. Polarized picrosirius red staining showed the presence of necrotic core calcium at culprit sites of CNs, whereas collagen calcium was more prevalent at the proximal and distal regions of CNs.

Conclusions: Our study suggests that fibrous cap disruption in CN with overlying thrombosis is initiated through the fragmentation of necrotic core calcifications, which is flanked-proximally and distally-by hard, collagen-rich calcification in coronary arteries, which are susceptible to mechanical stress. 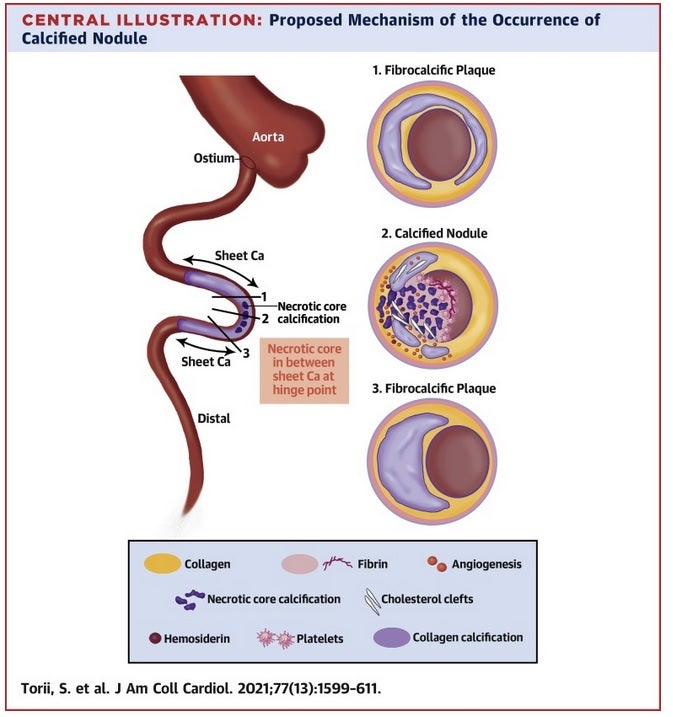